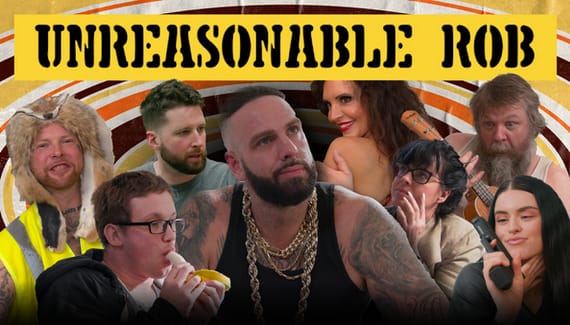 Rob (Pat Stay) is an absolute fucking menace. He is a 6'5", 260lb, tatted up chauvinistic deviant. A career criminal, who surrounds himself with even more nefarious characters. Rob's world is exposed through interactions with his sister's new boyfriend Brett (Nathan Godfrey), the MOST socially awkward, least threatening fly on the planet.

We pulled off the biggest troll move ever. Pat Stay convinced Nathan, the guy in the video, that he had to audition for his role as a requirement from Swearnet. If you're unfamiliar with the show Unreasonable Rob, it's a comedy series that Nathan has played a role in the entire time. He plays Brett, the main character, arguably the most important person in the show. So convincing him that he had to audition was suspicious enough. Somehow he fell for it all though, Pat strategically planned out the whole thing step by step and it was executed brilliantly.

Kate introduces her new socially awkward boyfriend, Brett, to her egotistical and chauvinistic brother, Rob, and things don't go well. Afterwards, Kate stumbles upon a homeless man living in a tent and welcomes him into the family.

Rob opens up to Brett and tells his story about how his large penis paralyzed his ex-girlfriend. Rob then puts a plan in place to help Brett exact revenge against his former croquet coach, however, the police interrogation doesn't go as Rob originally planned.

After receiving advise from Rob about how to provide for Kate, Brett has his first day of work at a mechanic shop. Brett quickly catches the eye of the mechanics and becomes the centre of attention inside the shop. Rob seeks psychiatric help, but soon realizes the office space is in need of a man's touch.